Your garbage disposal is an unsung hero when it comes to kitchen appliances. It allows for quick kitchen cleanup by shredding leftover bits of food and ushering them down the drain. When your garbage disposal malfunctions, you’ll want to get it repaired as quickly as possible for a reasonable price. Before that day comes, it’s good to think about the cost of garbage disposal repair. 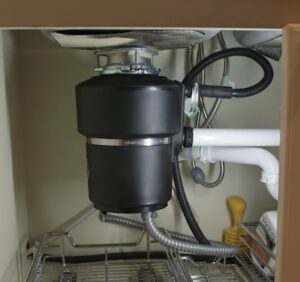 Whether you inherited your garbage disposal from a previous dishwashing homeowner or bought yours 20 years ago brand new, you know that brands matter. Some brands are more expensive than others to purchase and repair. Besides the cost of the parts, labor may be more for a more complex garbage disposal set-up, a budget brand such as Whirlpool costs between $55 and $140 to repair. A higher-end brand such as Moen has an average repair cost between $75 and $170.

Garbage Disposal Repair Costs Depend on the Problem

No matter how skilled your plumber is, they are constrained by the type of disposal issue when pricing a job. Besides its grinding chamber, your garbage disposal has several components prone to wear and tear. Impellers, the disposal’s grinding blades, are some of the most common. According to industry insiders, the average impeller costs $65 and $100 to repair. If you have a problem with a broken motor, you’ll likely pay between $75 and $150 to repair your garbage disposal. In contrast, the repair bill for a broken seal or gasket can be as low as $50.

If strange noises, odors, and regular system reset lead you to believe that your garbage disposal needs to be worked on, call a licensed and insured plumber as soon as possible.

Keep in mind that a broken garbage disposal may cost just as much money to repair and replace the unit. A licensed plumber can help you decide whether replacing or repairing your garbage disposal is more cost-effective.

We’re following exacting safety standards and mandates (as of August 13th, 2021) to be ready right now to help you.
Set Appointment

How can Apollo help you?