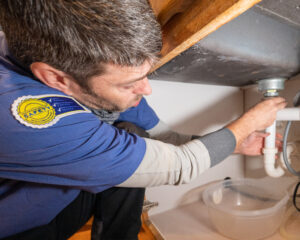 A garbage disposal that works properly will always make life at home a little easier and more pleasant. Disposals can seem a bit inscrutable, since the work they do is generally hidden from sight, just like the units themselves.

Fortunately, there are some simple ways to determine whether a disposal needs to be repaired at any given time. Learn about the following common issues and symptoms, and you will be able to help keep your own home’s disposal system running great.

Disposals are Simpler Than They Seem

Unlike many other home appliances and accessories, disposals are normally installed out of sight. Even a vigilant homeowner might go months without even seeing the housing of a disposal that gets used several times each day.

The work a disposal does normally happens with little or no visual feedback, as well. These facts can combine to make disposals seem mysterious, but there is not actually very much to them at all.

Every residential disposal attaches to the bottom of a sink, accepting scraps that get dropped in from above. When the switch for the disposal gets flipped, a powerful electric motor spins an impeller that grinds food and other waste against the outer wall of the unit’s upper chamber.

As scraps get whittled down into smaller and smaller pieces, flowing water pushes them through tiny, strategically placed holes. This straightforward mechanism helps protect a home’s plumbing from getting blocked by overly large chunks of food and other types of organic waste.

The simplicity of this process contributes to the reliability and longevity of residential disposals, in general. It also means that most signs of trouble can be easily identified by homeowners who know what to look for.

Probably the most obvious indication that a disposal might need to be repaired appears when flicking the switch does nothing. Even then, homeowners who look into the issue often discover that an easier solution is available.

Instead of being hardwired into an electrical system, many disposals are powered by the same sorts of outlets and plugs that are found throughout the average house. If your disposal fails to turn on, a quick check underneath the sink will sometimes reveal that it simply needs to be plugged back in.

If that is not the case, a call to a plumbing company will generally be in order. Something as simple as a broken electrical cord can sideline an otherwise-functional disposal. Should one of the many delicate windings within a disposal’s motor break, it will likewise fail to turn on.

Most such problems end up being easy for professionals to diagnose and repair. In some cases, a disposal unit that refuses to turn on will end up being a good candidate for replacement.

Another common sort of disposal problem sees the unit audibly responding when its switch gets flipped but failing to spring into motion. A disposal with this sort of issue will often emit a low, soft hum instead of the expected grinding noise. That means the motor is getting power and trying to engage but encountering too much resistance.

This most often happens when the disposal gets blocked by something too large or tough for its motor to deal with. Many units include a special bolt on the underside that a homeowner can manually rotate to try to resolve the problem.

Otherwise, it will be best to call a plumber. Being vigilant about the types and quantities of items you allow into your disposal will make this common problem less likely to arise. Most disposals are meant to process modest amounts of scraps quite easily but not a whole lot more.

The average disposal is fairly loud, with the level of noise typically increasing along with the load it has to bear. It is normal for a disposal that is actively grinding up food to make more and a different type of noise than one with an empty hopper.

Some types of noises can indicate problems that require attention. Repeated metallic clicking or clunking sounds, for instance, could mean that damaged parts within a disposal are contacting surfaces they are not supposed to.

Pronounced squealing or scraping noises will normally be a cause for concern, as well. Unplug your disposal and shine a light into the drain it is attached to, and you can safely check for foreign objects that could be giving rise to the unaccustomed sounds. If nothing is apparent, you should stop using your disposal until a professional plumber has a look at it.

Allowing even ground-up food into a home’s plumbing system can be problematic. Fats mixed in with scraps can congeal as they cool, encouraging even the tiniest solid particles to gather around them and restrict pipes.

Disposals themselves are not immune to clogs and drainage problems. Probably the single most common disposal-related issue of all is a notable slowing of drainage or an outright clog.

Handy homeowners can sometimes resolve such problems themselves by clearing the plumbing trap that is normally found next to a disposal. In many cases, a disposal that drains slowly or not at all will be held up by a partial or complete clog located further downstream.

Help With Any Disposal Problem is Just a Quick Call Away

At Apollo Plumbing, we regularly repair disposals installed in homes throughout our Puget Sound service area. Whether that means cleaning out a drainpipe or installing a new motor, we’re always ready to carry out fast, effective disposal repair work.

We were founded to provide plumbing services with a personal touch, and that includes keeping our customers as well-informed as possible at all times. Become familiar with the four common signs above, and you should find it easy to recognize when your home’s disposal needs repair or another sort of attention.

We’re following exacting safety standards and mandates (as of August 13th, 2021) to be ready right now to help you.
Set Appointment

How can Apollo help you?